I am making this post thinking “Better late than never”, as I was supposed to make this post a long time ago, actually in the beta period of Visual Studio 2012, like I did with Visual Studio 2010, unfortunately I was held up with other stuff, personal and work related. This post remained as partially completed in my blog’s drafts for a long time which I took and finished.

So with that in mind, here are the new features of Visual Studio 2012’s IDE.. 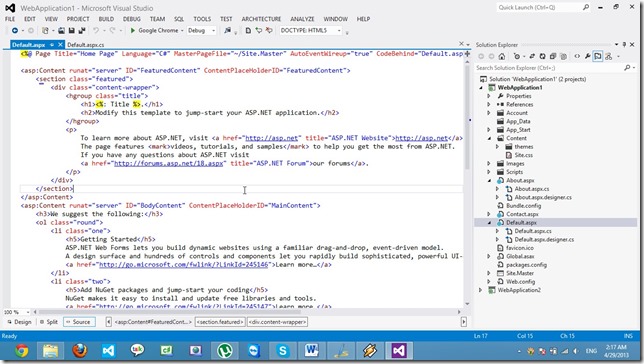 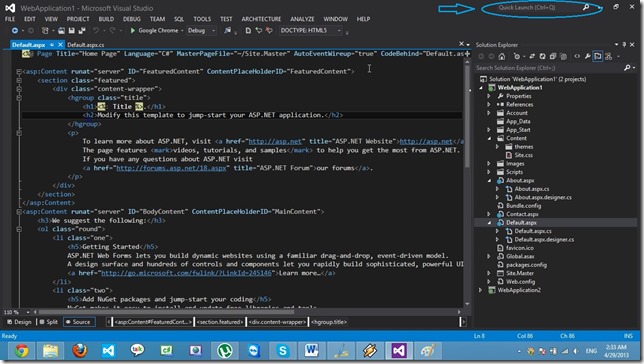 You can start typing few letters of the command you are looking for and Quick Launch will provide auto-suggest with commands that starts with the letters you have typed. 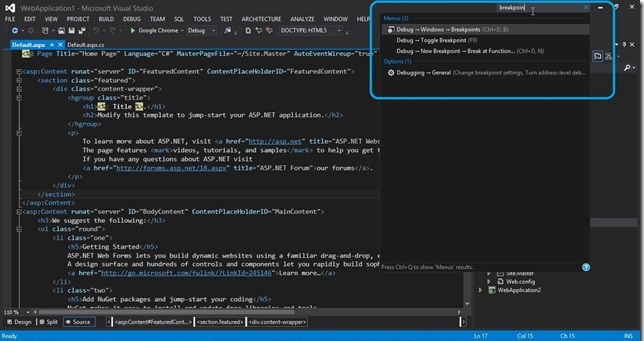 It also shows the shortcut keys for each command which is pretty neat.

You can also use the Quick Launch command-category shortcut keywords as listed below to narrow down the command search, ex: “@opt project”.

This is a feature found in Productivity Power Tools for Visual Studio 2010 this allows you to pin tabs that you want to remain open and easily accessible. When you pin a tab it is stuck to the left most corner of the tab-well.

Many of the windows in Visual Studio 2012 will have a search option including Solution Explorer and Toolbox.

A minimalistic approach has been taken in designing the new find window present in Visual Studio 2012. The advantage is that the find window will not hide the code window much. Some may miss the old find window which shows shortcuts to turn on/off options like Match Case, Match whole word, etc. This resembles the search option found in modern browsers.

Visual Studio 2012 provides you a preview of a file when you select it in the Solution Explorer. Earlier if you want to examine the file contents of a file, you have to open it and see, if you are trying to locate something (and if you can’t use find command for some reason) then you would have opened a lot of files messing up the workspace with lot of open tabs. Now with this preview tab, when you select a file it is opened and placed in the right corner of the tab-well as shown below and when you select another file the currently selected file’s content is shown in the same preview tab.

If you want to keep the file open in a normal tab instead of showing in the preview tab then you can click the Keep Open icon as shown below.

This preview tab feature also gives you another behavior which helps you to keep the IDE clean with only the files you like to keep open. Whenever you are debugging and stepping into your code Visual Studio will open other files when there is a chunk of code that is called by your main program file, and if there are lot of files involved then all of them are opened in the end of your debugging (stepping through) session. Now in Visual Studio 2012, the preview tab is utilized when you step through the code for which another file has to be loaded, once the other file’s statements are completed then the preview tab is automatically closed.

The browser drop down shown below provides a quick way to start your ASP.NET web application on any of the browsers installed on your machine, earlier you’d have to do this via other not-so-quick menu/context menu commands.

Nowadays, in most solutions you work on, the number of projects present are many, but you work only with few of them depending upon the role you play in the project. Visual Studio 2012 gives you a new feature of creating Solution explorer instances showing only a project or folder containing a set of files when you right click them as shown below. 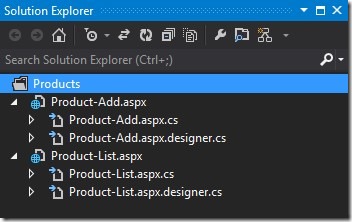 Page inspector is another new feature in Visual Studio 2012, it allows you to examine the html/css of a web page similar to IE Developer Tool Bar or Firefox’s Firebug add-on.

You can inspect a HTML element’s HTML and CSS, make edits and try out how it will look in the browser on the fly.

The Visual Studio 2012 editor supports development of HTML 5 and CSS 3 web sites by providing appropriate intellisense and code snippets, will write a future article about this.

In Visual Studio 2012, a single compact toolbar provides you with enough commands that you frequently use. This provides more screen real estate to show the code editor.

I will post a future article covering significant new features of Visual Studio 2012’s code editor, but I couldn’t resist talking about one exciting new feature that’s available when you edit CSS files in Visual Studio 2012. As shown below you get a color picker when you enter a CSS style element which requires a HTML color code as its value. 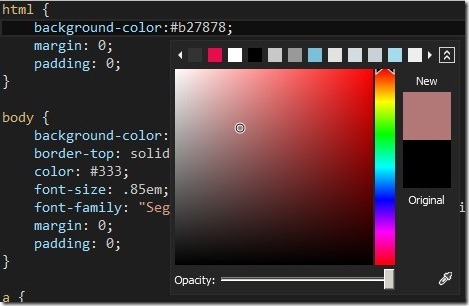 I have listed some of the significant Visual Studio 2012 New Features of IDE, let me know if I missed anything in the comments.

I'm Ashoka. I am a guy who loves technology, software dev and all the awesome things around.